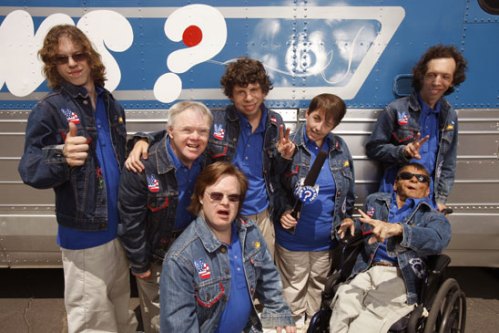 After almost a decade of Jackass tom-foolery MTV has decided to replace fake retards with real ones.

Here’s how they describe the show’s premise :

“How’s Your News is a documentary news series which features reporters with various disabilities. It began at a summer camp ten years ago. Humor is an important part of life with a disability( and life in general!!), so we’d like you to know that it’s okay to laugh at some of this material. We’re all laughing right along with you…..”

Which is to say: “Let’s have our intern draft a little language up for why this show is funny because it’s disabled people reporting. But let’s make it sound like we don’t want you to laugh. No, I mean we do. But only under certain conditions. Like, life is funny!”

First of all, is MTV having a talk with its 7 year old kid about why the guy at the ice-cream parlor is missing an arm?
How’s Your News? is a documentary that was originally made by the camp counselors at Camp Jabberwocky as a way to document a trip in which the campers produced news as they went across the country.

The reason for HYN? original success was that it empowered the people in the film. It didn’t punish them for being disabled by having to cook with Amy Sedaris.
For one, the comfort the filmmakers have with the subjects voids out any possible pre-occupation with their disabilities as the center of the narrative. The disabilities of the subjects is a premise with which you approach the documentary. Not the dominating theme.
Because of the groups various disabilities, they’re able to probe and question– with both a certain “specialness” as well as a particular brand of seriousness—characters who would otherwise feel self-conscious, judged, paranoid, etc in conversation with a “normal” journalist. (This includes a homeless man in an alleyway and an alcoholic ( he’s gotta be!!) crocodile wrestler.
<]
This brand of natural, genuine, and endearing reportage will fail in the hands of MTV because nothing that is made by that company has any intention of depicting heart-warming “realness”. And although that last sentence sounds like the musings of a teenage girl trying to figure out the implications her first hand-job has by writing in her diary, John Stamos won’t channel the same pathos that interviewing some sad bum does.

One anonymous commenter describes the social effects
HYN? will have on the local mall scene, as well as life expectancies.
Warning, they’re crazy and are probably this persons answer to everything:

“Great. Now there are gonna be a bunch of kids wearing black in the food court at the mall making fun of people with disabilities. This generation is a joke. Did you know that this is supposed to be the first generation ever that doesn’t exceed their parents in life expectancy, average salary, and several other important areas? Every generation in the history of man has progressed more than the previous generation until now. Pathetic.”

Still, let’s hand it to Trey Parker, Matt Stone and the rest of MTV for hoisting us deeper into the swinish LSD-esque warp-zone that our modern reality has become.